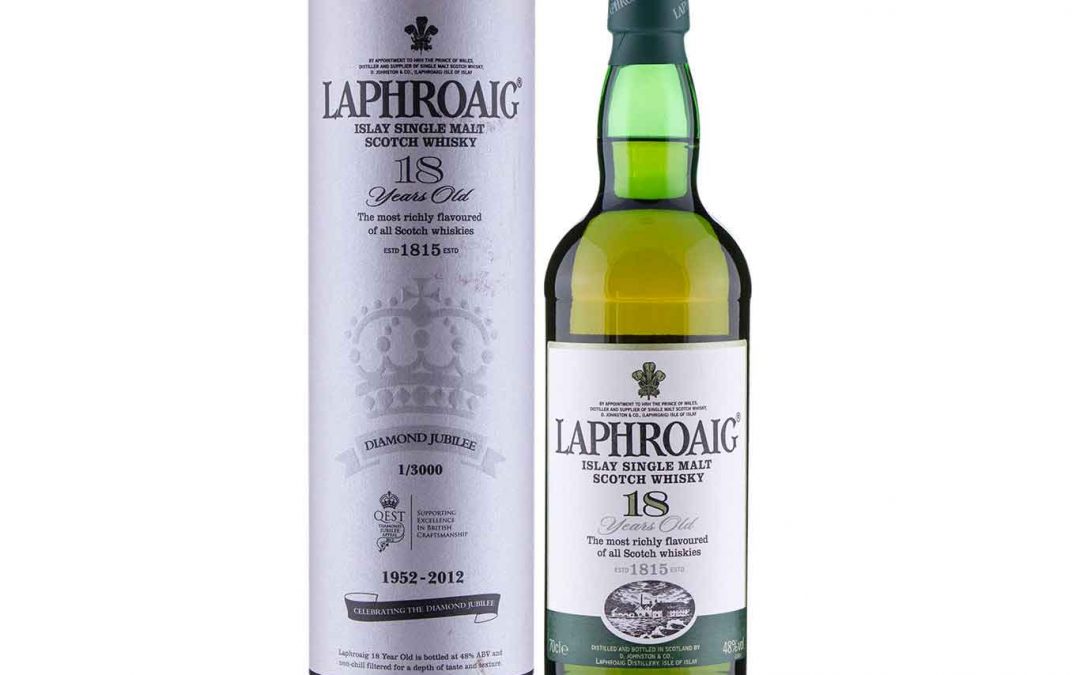 This Laphroaig 18 year old was released in Summer 2012 in a specially designed tube celebrating the Queen’s Diamond Jubilee.

There were only 3000 of these limited edition tubes made.

A commemorative edition of the award-winning Laphroaig 18 year old, released in Summer 2012 in a special presentation tube celebrating the Queen’s Diamond Jubilee – only 3000 of these limited edition tubes were made. Laphroaig are donating £3000 from the sales of this bottle to the Queen Elizabeth Scholarship Trust which helps young craftsmen. 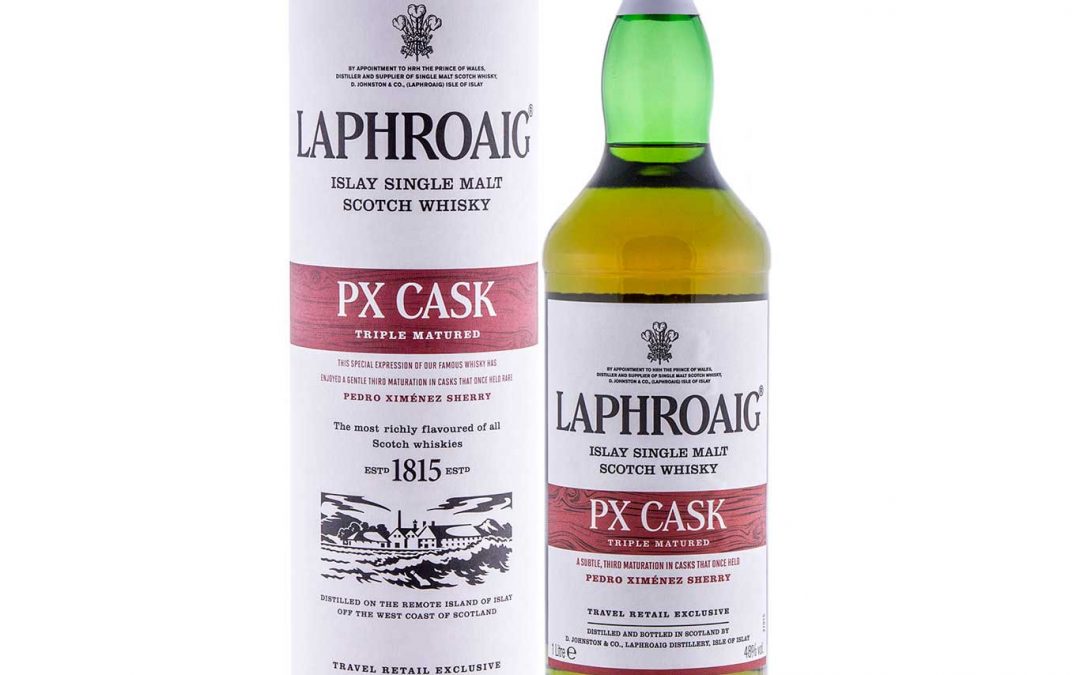 The Laphroaig PX Cask is made with whisky matured in three types of cask – American oak casks and Quarter casks before a final finishing period in ex-Pedro Ximenez sherry casks. The result is a flavour profile which is rich, full bodied, powerful and sweet. An exciting dram, not to be missed. 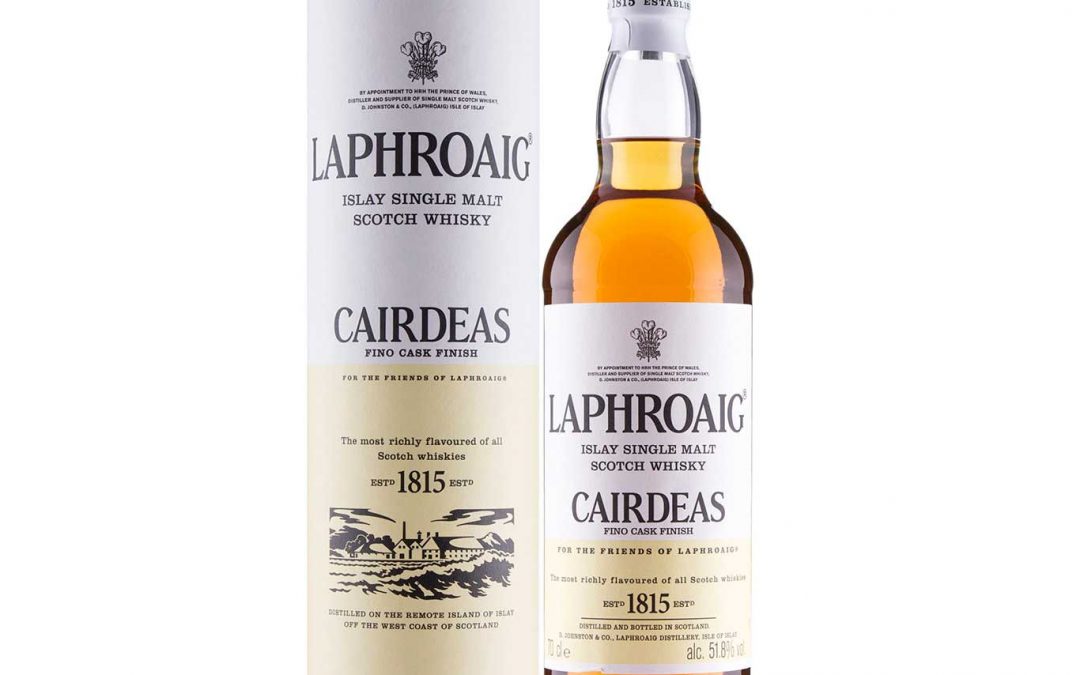 The 2018 release of Laphroaig Cairdeas, matured in first fill bourbon barrels then given a second maturation in Fino sherry casks. Released during the Feis Ile 2018, bottled at 51.8% vol. 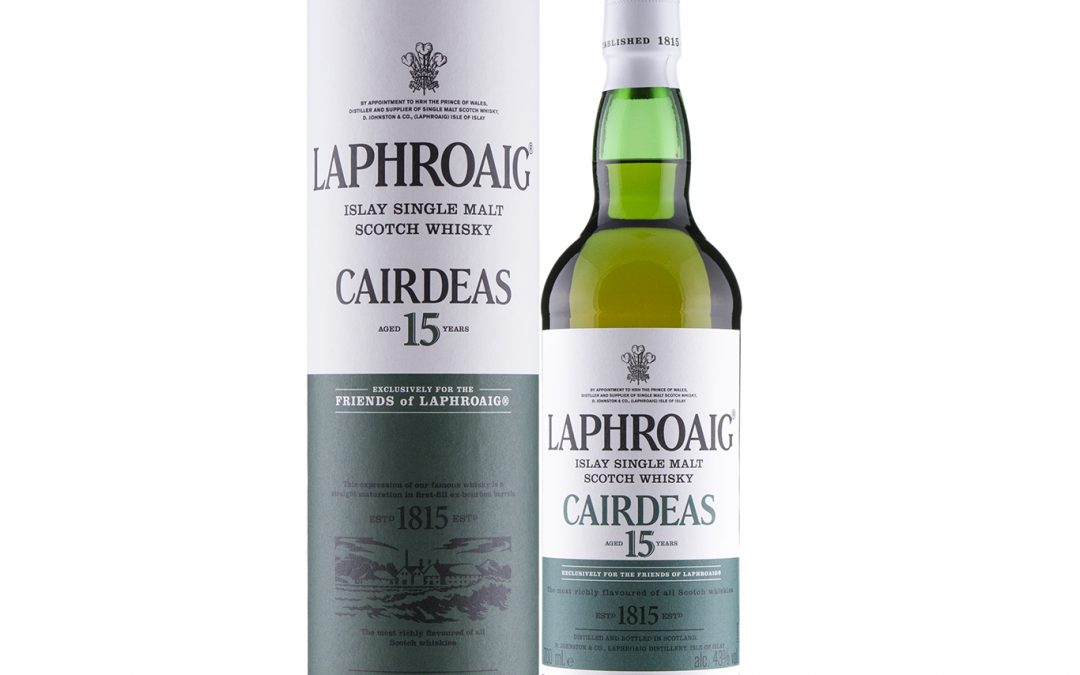 Laphroaig Cairdeas 15 Year Old is an ongoing part of the Friends of Laphroaig program.

This annual limited edition was distilled throughout 2002, then poured into first-fill ex-bourbon barrels to age next to the Atlantic Ocean. These barrels yield a bright gold colour, more intense vanilla flavour and subtle spice notes during the maturation process.

The result is a unique expression to be savoured by Friends of Laphroaig, old and new 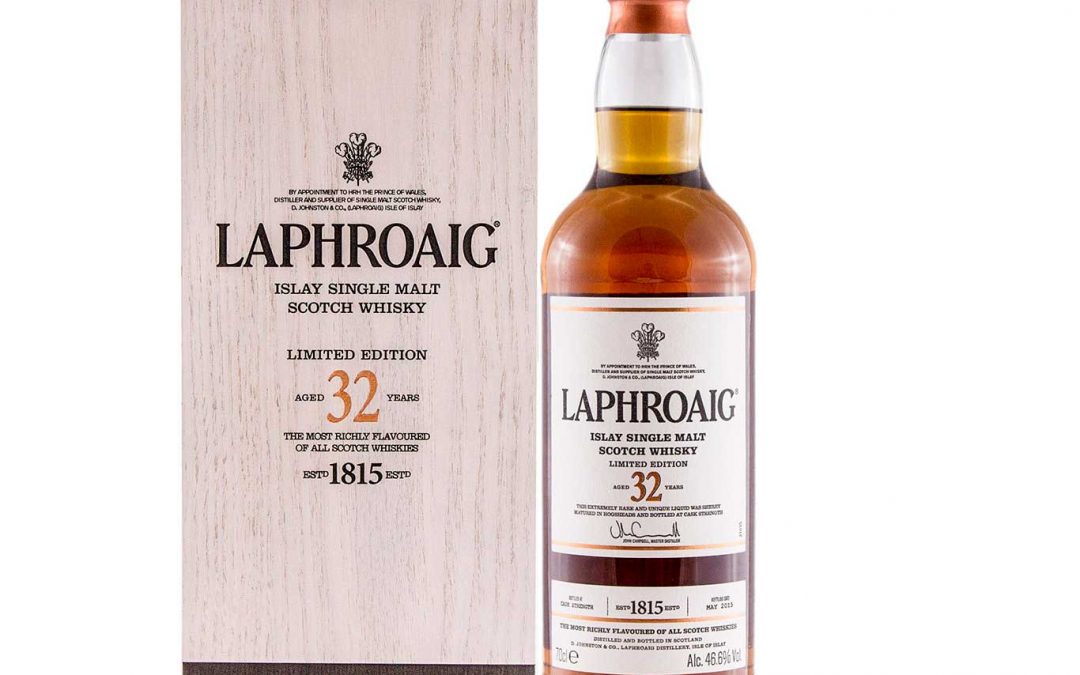 The Laphroaig
32-Year-Old, was matured in ex-Oloroso sherry casks, resulting in a deep
mahogany coloured whisky that was bottled at 93.4 proof. There are great sherry
notes: toffee, dried figs, cinnamon and brown sugar. Hints of red berries,
maybe a little ripe mango in the background. There were only 6,000 bottles available worldwide and most have now sold out. 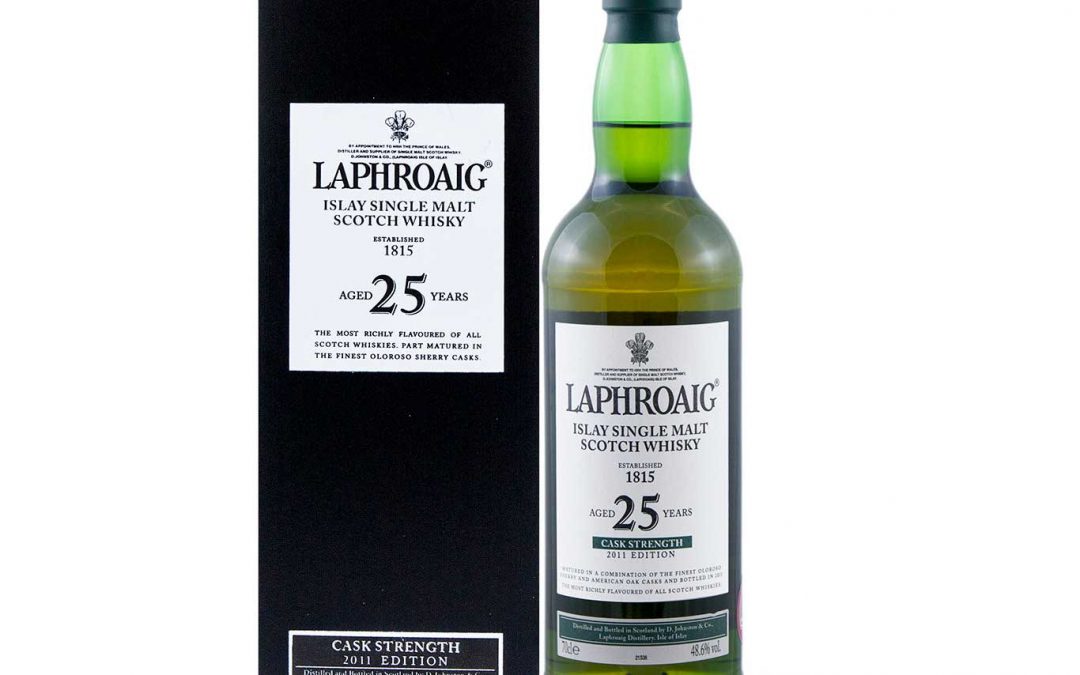 This cask strength 2011 release of Laphroaig 25 is a monster of the normal Laphroaig 25. The ABV in our opinion creates has uplifted the whisky giving it a dfferent dimension in complexity. Rich, smoky, oily and saltiness are more pronounced in this dram. As a result its holder of the IWSC medal for best cask strength whisky single malt! 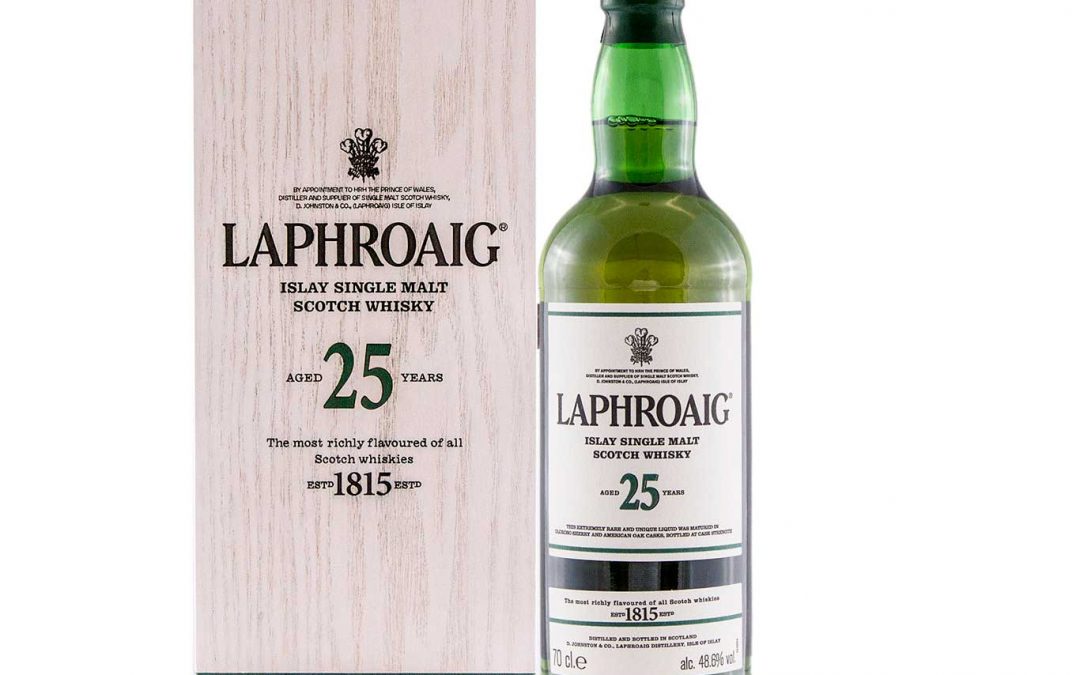 This 25 year old bottle of Laphroaig single malt is drawn from a single cask! It was matured in a combination of Oloroso sherry casks and bourbon barrels. The whisky has a delicate peaty note followed by a nuttiness and rich sherry sweetness. This is definitely one for the whisky connoisseur. 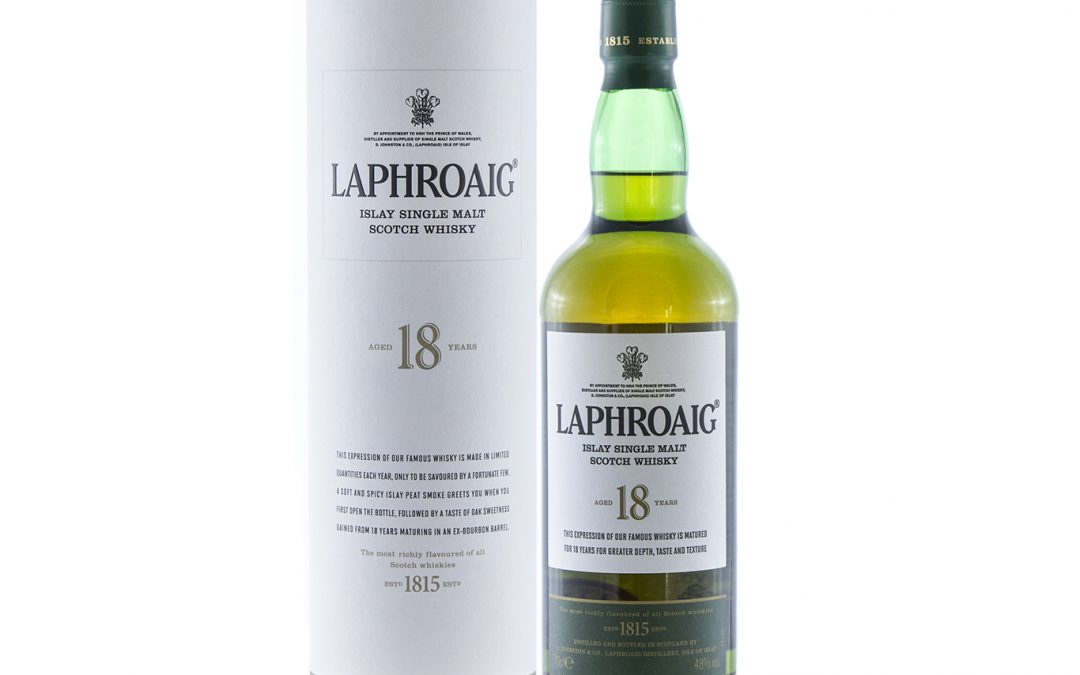 The Laphroaig 18 year old is made in small quantities each year and enjoyed by only a small amount of whisky lovers. A soft, sweet and spicy Islay peat smoke greets you when you open your first bottle. The first taste is an oak sweetness, from 18 years in the barrel. A faint hint of the sea can be detected, testimony to its time maturing on the remote island of Islay.

To celebrate its 200th anniversary, Laphroaig marked the occasion bringing back their 15 Year Old single malt Scotch whisky for a limited edition release.

The Laphroaig 15 year old was originally launched over 30 years ago made using a slightly lower level of peat but an increased alcohol strength and was eventually replaced with the Laphroaig 18 Years Old.

This special limited edition bottling pays tribute to the original 15 year old, which to this day is one of Laphroaig Distillery Manager John Campbell favourite ever expressions. This highly limited bottle combines full peat smoke flavours with rich fruit notes. 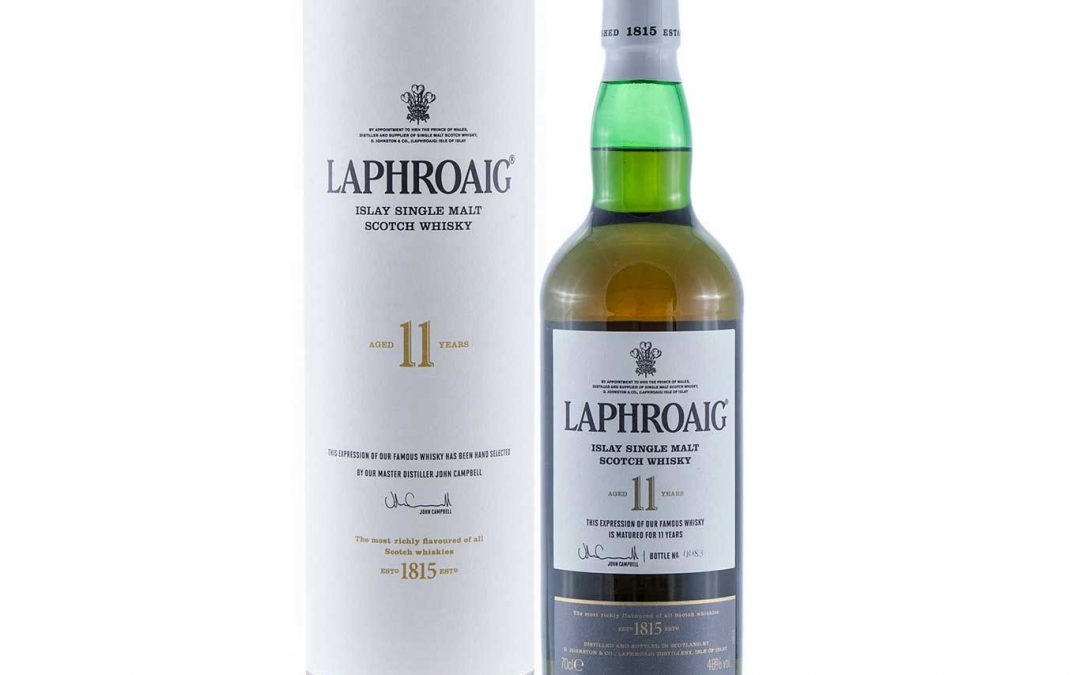 This bottle of Laphroaig was bottled exclusively for the Exquisite store which is located within Schiphol Airport in Amsterdam. It is the product of a triple maturation regime and was initially matured in ex-bourbon barrels before being transferred into quarter casks and finally into ex-Oloroso sherry butts before being bottled at 48% abv and as an 11 Year Old release.